Commission, now where from here...?

We have finally reached the part of the journey where I introduced the commission. This came in the form of a letter written by the CEO of the Animal Welfare Department of NZ that was sent to Jae (our managing director) and given to me (the secretary) to read to the 'team'.  I labored over the wording of the letter, trying not to give too much away to allow room for inquiring questions and discussion around what they were asking us to do. I have also treated this as a mini tension. While in role I voiced my concerns about whether we could possibly accept such a job as the animals were not the type we were used to dealing with.

I wasn't sure how it was going to go, but my intended effect worked...and then some! We had a very in-depth discussion about the pros and cons of accepting the job. Here are some of the notes from our meeting minutes:


What I hadn't factored in was how leaving out 'where' the animals would be moved to would have such a focus. Some of them have decided that we are also being asked to find homes for them as well as transport them. Others were arguing the fact they should be sent back to the wild so they are free to roam in their natural habitat. I feel this taking a slightly different direction to the one I have planned for. It may be that we will be debating having animals in captivity!

I have just spent the past hour or so finding School Journal articles about zoo animals and have found the perfect one that debates the pros and cons of animals in zoos and looks at how zoos have changed over time. I have been wondering how to integrate reading, writing and maths into MOTE and I think I've just stumbled on the solution. It will now be a case of weaving in and out of the 'story' as needed.

Setting up the company

I am trialling using Google Classroom as our company 'Intranet' which means that our Managing Director can directly post tasks and announcements as well as allowing the children as the Team to contact him to ask questions.

It worked well today as they received an assignment from Jae (Managing Director) to come up with a new logo design for the company. Apparently it's been a while since this was updated so to keep the company fresh he would like them to submit logo design ideas. A discussion about what an Intranet was needed to happen outside of the story first.

What was priceless is that when one of the children asked where they were going to do these designs, another child piped up and said in our Creative Design and Thinking Portfolios...these are the books that they have been working in for MOTE so far for the pet sketches. It showed me that they are beginning to think inside the story.

We have five finished already and they felt really important uploading their designs to the 'Company Intranet'. Once a logo is decided on we can upload it as the Google Classroom image header. 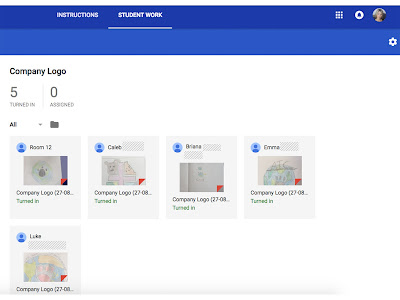 Well we have had an up and down couple of weeks due to school interruptions etc so we are not as far through as I'd hoped. Today we changed our program around and started the day with MOTE! This has been one of the biggest hurdles, trying to find a block of time where there are no children going out of class to different groups.

I have also had a few moments when I thought that I had gone about this wrong. Perhaps starting with the Animal Amusement Park photo wasn't the best place to start. I wondered for a while how I was going to move from that, to the company, then back to the Park. Hopefully this week will show me how this will go.

What is going well is the way in which we move in and out of our story. I decided to not go down the road of name tags and try to make it as organic as possible. Tim showed me that choosing my words carefully and carefully positioning myself within the space, I could show them that we are in role. So far this has been a success!

To help with being in role, I have set up a Hall of Fame and Notice board area using Science boards. This came about from a discussion about what a company needed to help show future clients what we were about. The children came up with a list of things that needed to be done so the 'secretary' (me) could set up. Unbeknown to them, I had preempted this and as part of what we did out of role, was talk about the difference between a domestic pet/animal and an animal we would find at an amusement park. They then chose a domestic pet to sketch. A selection of these were chosen and they were out aside ready for our Hall of Fame accompanied by thank you letters from previous clients. 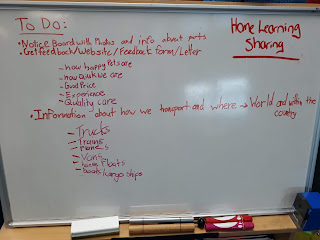 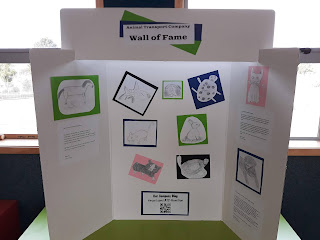 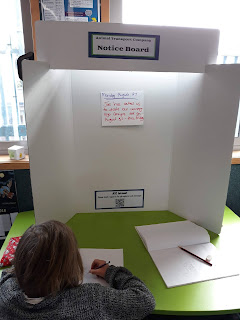 I have borrowed a couple of pet cages and brought one of mine along too to set up as part of our company display and it will also be useful when we get to the Technology designing stage as they will have some real examples to investigate. 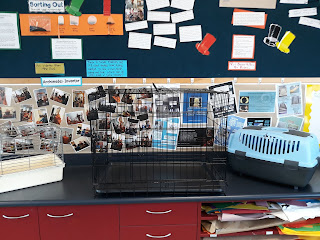 So I've started! I have to say I was a lot more nervous this time as I really wanted to get it right. I started by sitting on the floor with the kids and asked if I could tell them a story. This really hooked them in and they were eager to hear what I had to say.

I started with an exert from a 'newspaper article' which left was a bit of a teaser but got them asking lots of questions. I followed that up with a photo and used the questioning Tim demonstrated - what do the SEE etc. It worked so well.

One thing that was obvious was the theme I have chosen is well matched to the class. They are all very much into animals - big and small - and our Pet Transportation Company is perfect. They were really affected by the fact that two cheetah cubs are unwell and unhappy. The engagement is so high! I've realised my Mantles have been chosen without much thought to what the children would be interested in. Could be one of the reasons I've not been successful.

So after that we looked at other photos of animals from the story that were very sad looking and mostly caged. They responded to these in groups by re-creating a photo and including who/what else they think may have been in and around the area where the photographer was taking the photo. I took a long time deciding how to do thus and what it came down to was having them begin to think about the causes/reasons for the animals being in the state they were. TO do this they needed to think about contributing factors and what else was happening around the animals.

For the most part they got it and the photos they created showed lots of thought. The conversations beforehand were gold! 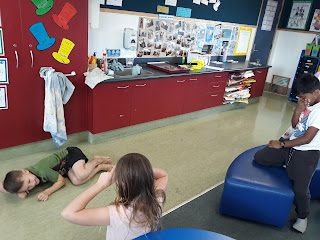 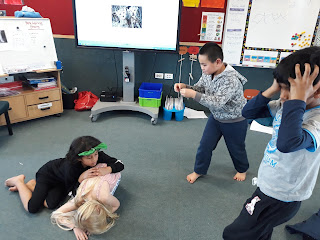 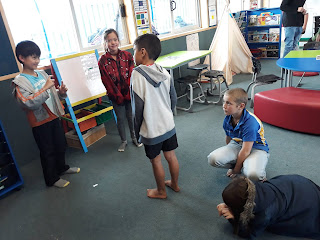 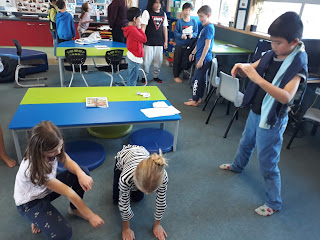 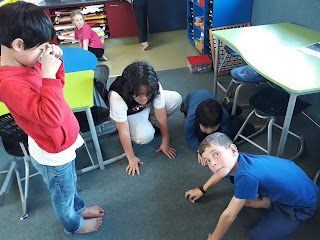 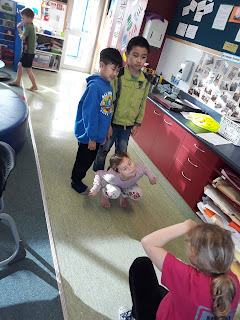 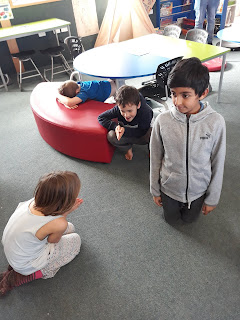 My context is: An experienced pet transportation team are commissioned to collect and transfer a group of animals from a small Animal Amusement Park that has been forced to close due the owner being unable to continue to fund and care for the animals in the park. The owner is concerned about how the animals will respond to being transported and and that they are not hurt or distressed in the move to various zoos around the country.

The Amusement Park owner did what she could for the animals while they were in her care, but recently has found it very difficult to provide the highest quality of care the animals deserve. As a consequence some of the animals are reported to be ill, undernourished or injured so Animal Welfare will be shutting the amusement park down and want the animals to be moved to Zoo’s around the country to be cared for properly.

The pet transportation team have only dealt with small domestic pets in the past; however, they have an excellent reputation for the highest quiality of care for the  animals they have transported around the world and for unique cage designs that ensure each animal is comfortable and relaxed on their journey. They are well reknown for regular communication with the pet owners, many of which have used them several times over the years.

This will be a challenge for the team as they have not transported zoo animals before, so they will need to be creative in their design of cages and liaise with the park owner and zoos to ensure they are successful.

I'm sharing my planning using the mind mapping tool Popplet. I find it easy to move ideas around and it's accessible on my iPad and laptop.

Although I'm not new to Mantle of the Expert, I wouldn't consider myself successful by any means. I have 'attempted' three MOTE's over my 10 year teaching career and have always fallen short. I have found it hard to balance giving the children control and facilitating the learning. Needless to say they have died a natural death. I often struggle with knowing how to begin a Mantle and how best to engage the children. Perhaps this is where I have gone wrong.

I recently attended a two day, winter workshop with Viv Aitken and Tim Taylor at Waikato University which was one of the most intense, but exciting workshops I've attended. It became apparent how lucky I was to have two experts in the field of Dramatic Inquiry very early on. Another bonus was the connections I have begun to make with the other attendees. I will publish my notes here at a later date.

My ideas around why I've been unsuccessful so far are that I didn't move the children through the steps outlined below from Tim's How to use the Continuum of Engagement  article:

I have also not fully understood my role as the facilitator and how much of the 'real life' to include in the Mantle's. I think I've allowed for the children to cat as adults too much and have stepped out of the process more than I should have. The children still need me and my guidance and without it they have floundered.

I'm super excited to have another go and my journey will be recorded here...the good, the bad and the ugly!

I'm still trying to decide how I will capture the children's learning through MOTE. Perhaps a blog, or a scrapbook. Watch this space...

Commission, now where from here...?

We have finally reached the part of the journey where I introduced the commission. This came in the form of a letter written by the CEO of t...